Gay penguins, mutual aid and the myth of survival of the fittest

By Monya Relles for the Gazette 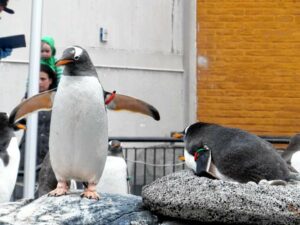 A gay penguin couple at an aquarium in Bergen, Norway. PHOTO BY LEBATIHEM VIA. FLICKR

Have you heard about gay penguins? You may remember Ray and Silo, the gay penguins of the Central Park Zoo of 2004, proud parents of their own adopted chick. Since then, there have been dozens of gay penguins in zoos, in news articles, and even on TV’s “Parks and Recreation.”

Gay penguins often spark the question of whether or not homosexuality is “natural” in the animal world. Yes: From gay penguins, to lesbian lizards, to fish who can change their sex in response to their environment, queerness is an integral part of the animal world and nature doesn’t care for the human-constructed boxes of male, female, straight or gay.

But, for all the discourse about gay penguins, what’s often missed is the opportunity to talk about what role same-sex pairings play in animal groupings — in particular, mutual aid. Mutual aid is the idea that something that benefits any members of a community (human or non-human) benefits all members of a community and that community members are interdependent on each other’s well-being.

After the devastation of Hurricanes Katrina and Sandy, mutual aid networks, mostly led by Black and brown women, sprang up to optimize the organization of community resources, and supply the food, housing and helping hands within communities. Mutual aid also surged during the COVID-19 pandemic: Pandemic “pods” arose in the U.S. and elsewhere, providing and delivering groceries, transportation and financial aid. And mutual aid in human communities has existed in Indigenous tribes like the Cree of the Northern US and Canada since long before that.

Mutual aid differs from charity in that it’s not done with an idea that the benefit goes in one direction. Mutual aid is a practice of strengthening the interconnected nature of our communities and building relationships that value equity over equality.

And now we return to penguins. Whatever the motivation of individual gay penguins, it’s true across the board that gay mates in animal species help the survival of the species. In zoos, gay penguins are often given eggs to raise, eggs that have been abandoned or forgotten by their original parents. This same thing happens in the wild: Gay adults will take in an abandoned baby of that species. The entire species has a better chance of surviving when its abandoned babies make it to adulthood.

The concept that the gay penguins would act in a way against their (immediate) best interest in order to help their survival goes against principles of competition and “survival of the fittest” rhetoric known as Darwinism. In fact, there are other lenses for considering how species survive.

Peter Kropotkin was a Russian ecologist, activist and anarcho-communist born in 1842. His 1902 book “Mutual Aid: A Factor of Evolution” chronicles his journey alongside other young Russian ecologists across Eastern Siberia and what is now Northern China. Kropotkin was amazed by abundance of life he found in this cold, inhospitable world. And rather than seeing animals compete for the scarce resources, he and his fellow ecologists saw species surviving by practicing mutual aid. He wrote about migratory birds making sure to wait for the slowest bird and the strongest birds taking turns at the head of the flock, breaking the headwinds. He further elaborates about the sharing of resources, the way herd animals move in solidarity to avoid predators and sharing the food they find.

Kropotkin’s main point wasn’t that animals don’t compete — even along his journey he found prey animals and animals with plenty of resources in competition — but rather that competition is only a part of the story of survival. While some animals competed against each other, Kropotkin saw the species on his journey working together to compete against their environment to optimize their collective chances for survival.

Even across species, many organisms practice mutualism, or mutual aid. Squirrels bury far more acorns than they could eat in a winter, and oak trees make them delicious food in return. Bees and other species pollinate flowers in return for nectar. Ants protect aphids from ladybugs and aphids produce a kind of syrup for the ants in return. If each of these species were focused solely on their own survival, then cooperation would seem like a waste of resources. And yet, each species does better with the survival of the other.

Darwin himself said that his ideas about “survival of the fittest” were meant to be applied exclusively to individual animals within a species. But historically, Darwinism has been used to justify genocide, colonization, white supremacy and war. Thomas Henry Huxley, a student of Darwin, often used natural selection to mean that it was “natural” for the British to kill and enslave other societies.

Yet I often hear that humans are naturally selfish, violent and exploitative, an idea that comes from this skewed understanding of evolution (and dominance of colonialist paradigms). What if we centered Kropotkin’s ideas about mutual aid in our definitions of what’s natural? In that paradigm, gay penguins adopting abandoned eggs makes perfect sense.

Competition and selfishness in humans isn’t any more “natural” than heterosexuality. If we look to nature, we can see an abundance of examples of interspecies and intraspecies cooperation right alongside animals who practice queerness, who have little regard for biological sex, or any of the other artificial boxes some humans have created. Inspiration is all around us for ways that we can cooperate, nurture, and love “naturally” in order to help each other and the human and non-human inhabitants of the world.

Monya Relles (they/them) is an educator at the Hitchcock Center for the Environment with a passion for environmental justice. In their free time they can be found hiking, dancing or playing off-key ukulele at the Connecticut River, much to the mortification of people who pass by.

Earth Matters has been a project of the Hitchcock Center for the Environment for 13 years. After two years of the pandemic, the Center’s doors and trails are once again open at 845 West St in Amherst. To learn more, visit hitchcockcenter.org.