How I went from arachnophobia to arachnophilia

By Katie Koerten for the Gazette

Arachnophobia is defined by Merriam-Webster as “pathological fear or loathing of arachnids and especially spiders.” But in my experience, this fear doesn’t make you pathological, it just makes you normal. Among many of my friends and family, it is acceptable, even expected, to post photos on social media of spiders found in their homes with captions such as “Time to move out!” or “Should I burn the house down?” or a simple “Gross!” At least in my world, hating spiders puts you in the majority.

I, too, once feared and loathed spiders. I shudder to say this now, but as a child, if I found a spider in my room, I yelled for my dad to come kill it. (And even later, in college, with my dad many miles away, I once yelled for a hall-mate to deal with a huge spider in my dorm room.) This was considered normal and acceptable in my known universe.

Eventually (perhaps against the odds?) my path led me to environmental education, and that’s when my fear started to morph into a cautious appreciation of spiders. I pieced together the sheer artistry of their webs, the remarkable strength of their silk, their control of insects that annoy us, their diverse hunting strategies, the way they liquefy their prey. And my stance shifted to: Wow. I may not want to touch a spider anytime soon, but objectively they are pretty fascinating.

Years of working with children outdoors taught me that the way I behave around kids and nature matters; if I model fear, then fear is what they will learn. As an educator I have had the opportunity to reframe negative connotations of animals that children might learn in their lives by calling attention to their adaptations for survival, the role they play in their ecosystems, and when possible, the ways they interact positively with humans. At the Hitchcock Center we teach about the value of all living things and the ways we are all connected.

Spiders have a role to play as do all animals, even the ones we may find creepy or annoying. Although there is certainly a ferocity to the practice of ensnaring insects in a sticky web, immobilizing them with silk, injecting them with venom and slurping up their insides, humans count on spiders to keep insect populations in check. Spiders belong. And this is the sentiment I have strived to convey to my students.

My arachnophilia, a profound albeit unlikely delight in spiders, deepened when I became a parent. Knowing what I knew about how influential adults can be in passing on their fears and anxieties, I resolved to not raise an arachnophobic child. From everything I’d seen as an educator, a lot was in my control in molding my child’s perception of spiders.

Part of my strategy was exposing my kid to positive spider media. In our family, we call black and yellow garden spiders “Mabels” based on a “Cat in the Hat” episode in which the main characters shrink down in size and meet a friendly spider named Mabel who teaches them how she builds her webs. We happen to have many large jumping spiders in our home (I joke that they pay their rent by eating annoying bugs), all of whom are named “Nefertiti” based on the true story of a jumping spider of the same name who was sent to space! And I can’t tell you how many times we’ve watched a YouTube video called “Bea’s Bugs” in which a tiny pet jumping spider named Bea has an extremely cute “conversation” with her owner, who is telling her not to eat too many bugs or she’ll get uncomfortably full (spoiler alert: Bea gets uncomfortably full). Because spiders are regarded as positive, helpful, even cute animals in our home, at least five spider stuffed animals number among my daughter’s enormous stuffed animal collection. 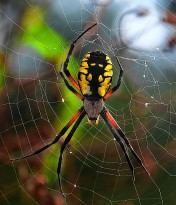 But beyond books and TV shows, in order to raise an arachnophilic kid, she needs me to actively appreciate spiders regularly. And so when I find a spider, or a web, I stop, marvel and call attention to it. I model curiosity and wonder, and make specific observations: “Wow, her legs have stripes!” and “Oh, cool, she has orange on her abdomen!” And while this may seem over the top, I find it goes a long way for me to speak to the spider, and say things like, “Hi, sweetheart,” and “Don’t be scared, we’re your friends.” (And if you’re wondering, yes, I do this whether or not children are present.) Anything it takes to create empathy for a maligned creature is worth it to me. By emphasizing the wonder and beauty of spiders, that becomes my child’s relationship with spiders, not fear.

Don’t get me wrong, I am still startled by the occasional spider, and I don’t expect readers of this column to suddenly flip a switch on how they feel about spiders. But maybe, if you’re not a fan of spiders, you might greet the next spider you see? Read a spider book to a child in your life? Take and share a photo of a pretty web? Spiders belong, and our appreciation can do them a lot of good.

Katie Koerten (she/her) is an environmental educator at the Hitchcock Center for the Environment.

Earth Matters, written by staff and associates of the Hitchcock Center for the Environment at 845 West St., Amherst, appears every other week in the Daily Hampshire Gazette. For more information, call 413-256-6006, or write to us.