By Tom Litwin for the Gazette 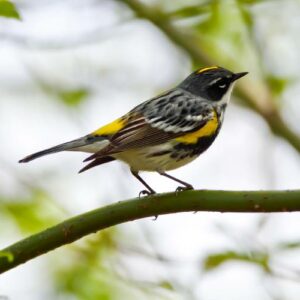 A yellow-rumped warbler. These birds are among the last of the Neotropical migrants to leave our area in the fall. PHOTO BY VICTOR MANUEL ESPINOSA/FLICKR

There’s a vast show of nature that occurs twice a year. If you’re not looking for it, it’s easy to miss. In the spring millions of Neotropical migrant birds, including warblers, thrushes, flycatchers and vireos, flood into New England from Central and South America, and from the Caribbean. In fall they return to their wintering grounds.

It’s amazing and seemingly improbable that a warbler weighing one-third of an ounce — the weight of four pennies, composed of bone, feathers and flesh, and feeding on insects, berries and seeds — can routinely accomplish this feat. With a push of their spindly legs, and a flap of their wings, they overcome gravity, flying most of their journeys at night, navigating by stars and the earth’s magnetic fields. This lifestyle is extremely hazardous; weather, natural predators and domestic cats, collisions with buildings, and loss of habitat all take their toll.

Spring is a more concentrated movement than fall migration since each species is driven to breed and raise young in a narrow window of time. It’s a wondrous experience to be in the woods early on a spring morning when a wave of migrants riding a front drops out of the sky to rest and feed. The air is filled with chips and calls, the trees are “dripping” with birds with breeding plumages on full display. And then, they’re gone, the woods quiet.

Since each bird and each species is responding to their particular reproductive biology and environment in a variety of ways, the end of the breeding season is highly variable, making the start of fall migration more diffuse and protracted than spring migration. As a Neotropical migrant travels between its breeding and wintering grounds, it will have flown thousands of miles, established a nesting territory, found a mate, produced one or two clutches of eggs, raised its young to independence and fattened up for the ensuing migration.

With the exception of a straggling yellow-rumped warbler, November marks the end of fall migration in Massachusetts. Although the Neotropical migrants are long gone, a strong shared connection between us remains — coffee. It’s a long story that begins in the 13th century with the Coffea forests of the Ethiopia Plateau. There, monasteries discovered an energizing beverage could be made from the coffee tree’s cherry-like berries. As trade expanded, so did the market for coffee. To meet demand, by the 16th century coffee cultivation expanded to the Arabian Peninsula. Coffee making was refined, with the seed, or bean, being separated from the berry and roasted. Coffee houses became centers of social and business activity. Dutch traders brought coffee to New Amsterdam (later New York) in the mid-1600s.

In 1723, the French introduced a coffee seedling from the botanic garden of Louis XIV to the Caribbean island of Martinique. Soon, plantations spread throughout the tropical forests of the Caribbean, and Central and South America — the same forests used by wintering migrant birds and a host of other species. Traditional shade farming grows the coffee shrub in the understory, below the forest canopy. Although native plants are replaced in the understory, the more diverse structure of the forest is maintained.

The more complex a habitat is with different layers of vegetation, the more opportunity there is for a greater number of species, including birds, to find their niche — food, cover and water. Researchers at the Smithsonian Migratory Bird Center found that shade farms supported over 150 species of birds, including gray catbirds, scarlet tanagers, wood thrush and ovenbirds. This diversity richness is second only to undisturbed forest. 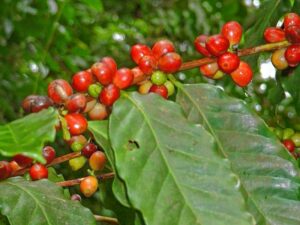 Coffee berries on the tree. Inside these berries are the seeds that we call coffee beans, which are roasted to make them ready for brewing. PHOTO BY PETER ABRAHAMSEN/FLICKR

Today the global coffee market is valued at $102 billion, with an estimated 2.25 billion cups consumed each day. Americans account for 400 million of those cups. To meet demand, the trend has been toward coffee production that eliminates the forest canopy and replaces highly diverse forest habitat with maintenance-intensive coffee monocultures.

Bird diversity in sun plantations is significantly lower than shade plantations. Sun plantations also require intensive use of herbicides, insecticides and fertilizers. This is one contributing factor to habitat loss and the dramatic decline of birds recently reported by the Cornell Laboratory of Ornithology.

As winter sets in, Neotropical birds seem a great distance away. But we are, in fact, still connected by the cup of coffee we hold in our hands. In 1997 the Smithsonian’s Conservation Biology Institute and the Sustainable Coffee Congress developed the criteria for Bird Friendly coffee that promotes shade-grown practices. The Smithsonian’s website makes it easy to find Bird Friendly coffee at local stores or online.

Expanding on these criteria, the non-profit Enveritas engages with major coffee roasters and small coffee farms around the world. Using thirty criteria, they visit small farms to evaluate their environmental, sustainability, economic and social practices. Simultaneously, they work with coffee roasters to evaluate sustainability practices in their supply chains. In 2022, they will visit 20 countries and 50,000 farms.

Sustainably-grown coffee is a twofer: We can provide critical support for both resident and migrant birds on the wintering grounds, while having access to certified, high-quality coffee. As a cold early morning rain falls on this November day, I’m connected to the tropics by, of all things, a fresh-brewed pot of coffee.

Tom Litwin (he/him) is a conservation biologist and former Director of the Clark Science Center at Smith College. He is retired from the Jackson Laboratory in Bar Harbor, Maine and Farmington, Connecticut, where he served as the Vice President for Education, and continues as a Visiting Scholar. To find Bird Friendly coffee, go to https://nationalzoo.si.edu/migratory-birds/find-bird-friendly-coffee-retailer-near-you. To learn more about Enveritas, visit www.enveritas.org.