By TOM LITWIN For the Gazette

Editor’s note: This is the second of a two-part series. Part 1 was published on December 1.

Three days out of Dutch Harbor, the U.S. Coast Guard icebreaker Healy was coming into position about 75 miles off the southwest coast of St. Lawrence Island in the northern Bering Sea. The Healy, both a heavy icebreaker and well-equipped research ship, was transporting an international team of scientists to investigate how the Bering Sea ecosystem functions.

It was 2008 and the International Polar Year was underway. Its goal was to organize an international research and educational effort focusing on the Earth’s two poles, the Arctic and Antarctica. There was growing concern that climate change was affecting the poles, and the rest of the planet, in ways we didn’t yet understand. For a month, we’d be working on the ice, focusing on one of Earth’s most remote, productive oceans. We couldn’t know in 2008 the dramatic changes that would occur in this very location over the next 10 years.

For our first “on ice” deployment we had a glorious day — a crystal-clear blue sky contrasting with a vast unbroken 360-degree expanse of white, ice and snow. We soon learned from the Safety Officer that beauty should not be confused with lack of danger. Sea ice is an imperfect surface, and falling into freezing water was to be avoided — awareness at all times was sternly stressed. With that we helped each other struggle into one-piece, bright red survival suits that served as a hedge against hypothermia and drowning should you fall in, giving time to be rescued.

The excited chatter grew amongst the waiting scientists as we waited to go down to the ice. This is what all the preparation was for; in a moment we would be standing on the ice-covered Bering Sea. First down were two Coast Guard crew, the swimmer and bear watch. The swimmer okayed the safety of the ice. He would pull you out of the water if you had the misfortune of falling in. The bear watch would scan for polar bears, clearing everyone off the ice should a bear be approaching. With the “all clear” the rest of us streamed down the gangway and scattered across the ice to set up data-collecting work stations. 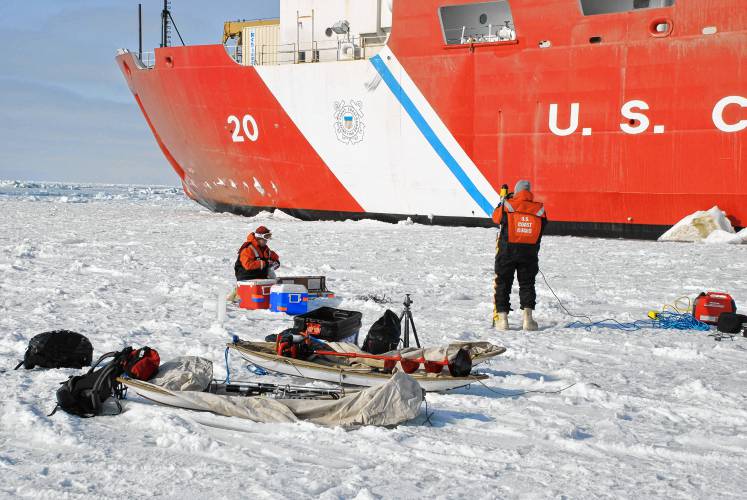 The researcher standing on the right is holding a large ice corer. Tom Litwin Photo

I joined Rolf Gradinger, a marine biologist from the University of Alaska, Fairbanks. Rolf and his team were taking ice cores that would sample the plants and animals that live in the sea ice ecological community. Rolf is passionate about correcting the misunderstanding about sea ice: “We think of sea ice like the freezer at home — everything is sterile, nothing is growing. But here it’s just the opposite. If you take a chunk of sea ice and melt it, and look under a microscope, you will find millions of tiny plants and animals — they are moving, swimming, crawling around — it’s hundreds of species we’re talking about.” Far from lifeless, just below our feet was a vibrant, flourishing world of life and interconnection

Then there is us, the humans. The Bering Sea’s Dutch Harbor is  where 50 percent of U.S. commercial fish and shellfish landings arrive, reaching 787 million pounds a year — pollock, salmon, halibut, crab, cod — that we regularly find in our supermarkets. Walrus, whale, seal and fish are important sources of protein for nearly 55,000 Native Alaskans living in rural subsistence communities, 25 million pounds of food a year. Ecologically and commercially, the Bering Sea is one of the riches ecosystems on the planet, and it all starts with sea ice — which is rapidly melting.

In this 10th anniversary year of our voyage, concern has changed to fact: The Arctic is warming at twice the rate of the rest of the planet, sea ice is melting at record levels, the disruption of the polar vortex and jet stream is influencing lower latitude weather, sea levels are rising, extreme weather events are increasing. Unlike the more extensive, thick ice we encountered in 2008, just ten years later the ice around St. Lawrence Island was greatly diminished to record lows, or nonexistent.

What can be done to mitigate the loss of Arctic sea ice? The answer lies in the 2015 Paris Climate Agreement. Two independent Arctic climate modeling studies looked at the Paris Agreement emissions scenarios “that would stabilize global temperatures at 1.5°C to 2.0°C above pre-industrial levels.” The seemingly small difference of half a degree between 1.5C to 2.0C produces dramatically different outcomes. Stabilization at 1.5C results in an ice-free Arctic summer once every 40 years. With stabilization at 2.0C the models predict ice-free summers once in every five years, an eightfold decrease. Under current polices, the United Nations projects warming to increase by 2100 to 3.0C above pre-industrial levels. Urgent international cooperation to reverse this trend is imperative. All this was again confirmed with the report from the International Panel on Climate Change this September.

On August 4, 2017, the United States informed the United Nations it was officially withdrawing from the Paris Climate Agreement.

Tom Litwin is a conservation biologist and former Director of the Clark Science Center at Smith College. He is recently retired from the Jackson Laboratory in Bar Harbor, Maine and Farmington, CT, where he served as the Vice President for Education, and continues as a Visiting Scholar. More on Tom’s Arctic and Bering Sea Thin Ice research can be found at pbs.org/wgbh/nova/extremeice/thinice.html.

By Michael Dover
By Christine Hatch
By David Spector
By Lawrence J. Winship
By John Sinton