Mistletoe: It’s not just about kissing

By Joshua Rose for the Gazette 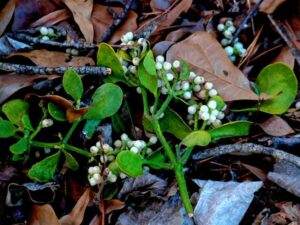 American mistletoe (Phoradendron leucarpum), like this sprig, is imported to New England for Christmas from farther south, since the northern limit of this large, leafy species is New Jersey. PHOTO BY DOUG MCABEE / FLICKR

’Tis the season of mistletoe, sort of. Mistletoe is evergreen, meaning it’s present year-round. However, winter is the season when we think about mistletoe most often.

In the southeastern U.S., where I am writing this piece, mistletoe is hidden among the leaves for three seasons. Right now, though, with other leaves long since fallen, the clumps of still-green mistletoe stand out. This seasonal increase in visibility may have helped mistletoe become one of the iconic symbols of Christmas, dating back to at least the 1700s.

The modern Christmas behavior of kissing under mistletoe may have begun as a combination of Celtic traditions linking mistletoe to fertility, with Roman practices of having enemies settle differences or make peace under the plant; both cultures are reputed by various sources to have hung it over the doorways of homes to grant peace, good luck, or protection to the family living there.

Other cultures view mistletoe less romantically. Nordic mythologies connect the plant to the god Loki, who crafted a dart from it to kill his otherwise invulnerable stepbrother, Baldir. Heroes of Greek mythology used mistletoe to enter the underworld. These connections likely arose from mistletoe’s toxicity, which is significantly higher in European mistletoe than in the far less poisonous American species. Many cultures included mistletoe in folk-medicine treatments of a wide variety of complaints.

Aside from remaining green all winter, mistletoe is not an especially decorative plant. We rarely, if ever, think about mistletoe flowers, but they do exist. Mistletoe is dioecious: Its small and not at all colorful flowers have only pollen-producing male or only fruit-making female parts, not both. However, they are an important food source for pollinating insects because they bloom earlier than most flowering plants, usually between April and June. 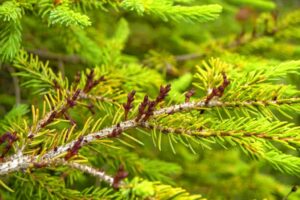 Dwarf mistletoe (Arceuthobium pusillum) in Acadia National Park in Maine. This species is found as far north as Labrador and survives the cold by having a shorter stem, fewer branches, and leaves that are reduced to little scales. PHOTO BY DOUG MCGRADY / FLICKR

The mistletoe indigenous to Massachusetts is even less conspicuous. Our native species is a dwarf mistletoe (Arceuthobium pusillum) that survives the cold by having a shorter stem, fewer branches, and leaves reduced to little scales — adaptations allowing it to range as far north as Labrador. Dwarf mistletoe is rare enough in Massachusetts, near the southern limit of its range, that it is state-listed as a species of special concern. While its reduced profile makes spotting this mistletoe itself challenging, host trees supporting it often develop “witch’s brooms”: atypical growth patterns that can also arise due to certain fungi or mites. Mistletoe for Christmas in New England has to be imported from farther south, since the northern limit of the large, leafy species is New Jersey.

If trees had thoughts, they would probably wonder why humans consider parasites romantic. Mistletoe growing on a tree is analogous to a tick or leech sucking blood from one of us. Mistletoes are parasites, penetrating living tissues to steal nutrition from the sap of their host trees. Technically they are hemiparasites, making some nutrition through photosynthesis in addition to what they steal from their hosts.

One of the most crucial obstacles for any parasite is finding new hosts. Mistletoe has a more difficult challenge than many parasites, because as a plant, it cannot move; and because it grows above the ground, its seeds have to travel upwards, else gravity would nudge every generation closer to the ground than its parents. Most mistletoe species get animals, especially birds, to disperse their seeds. The mistle thrush, a European cousin of our robin, is named for its fondness for mistletoe berries; the Phainopepla, a bird of the southwestern U.S. and northwestern Mexico, has a similar preference. Mistletoe seeds are coated with an adhesive compound, viscin, which lets them stick to birds’ bills, feathers, or feet. The birds then wipe these seeds off on twigs, where they can also stick, germinating into new plants. The name “mistletoe” is widely thought to be derived from a Germanic phrase meaning “dung on a stick” in tribute to this seed-dispersal technique.

Our dwarf mistletoes, while visually more subtle than their relatives, have a more dramatic way of dispersing seeds. Their reduced size limits their ability to generate fruits appealing to birds. Instead, their fruit swells with fluid, essentially a water balloon, building up pressure until it bursts. The explosion can propel a seed up to 16 meters away. The same adhesive that causes the seeds of other species to stick to birds, sticks these seeds to the surfaces they impact; if all goes well, those surfaces are tree branches that become hosts to new mistletoe plants. Whether through birds or more explosively, these upwardly mobile seeds help keep mistletoe above the ground, still hanging over our heads. Kissing is strictly optional.

Joshua Rose is a naturalist who lives in Amherst. He is vice president of the Hampshire Bird Club, Northeast Chapter head of the Dragonfly Society of the Americas and a contributing editor of the website bugguide.net; he regularly leads programs for local nature-oriented groups.

Earth Matters has been a project of the Hitchcock Center for the Environment for 13 years. After two years of the pandemic, the center’s doors and trails are once again open at 845 West St in Amherst. To learn more, visit hitchcockcenter.org.