Why do animals communicate?

By David Spector for the Gazette

For many years my research brought me outside in May and June about an hour before sunrise to hear and record yellow warblers. Males in breeding season sang intensively for a half-hour or so, and, depending on their mating status, sang in a somewhat different style and less intensively well into the morning. Females often responded to male song with “chip” notes, and both sexes used a variety of short calls. Each vocalizing bird revealed its location, and often much more information — its species, its sex, its individual identity, its mating status, its willingness to fight if approached by another of the same species and sex, and perhaps more about its behavioral state.

Such information is valuable, possibly affecting the bird’s survival. Why share it? How might sharing this information benefit the individual animal? I suggest three answers to these questions: leakage, manipulation and probing. 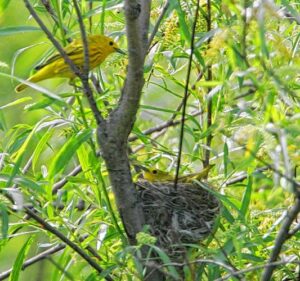 A male yellow warbler perched above a barely visible female on the nest. A male often announces his approach to a nest with a song, identifying himself and manipulating his mate to expect his arrival. PHOTO BY JOHN VAN DE GRAAFF

Leakage
An animal can’t keep information about its location entirely secret. Any living organism is a chemical processor and produces detectable chemical waste. A moving organism produces sound and visible motion. Burying evidence (e.g., a cat covering its feces), camouflage (e.g., a caterpillar resembling a twig), and moving slowly (e.g., a cat creeping slowly toward a bird) may minimize leakage about location, but some detectability always remains. Given the inevitable escape of information, evolution favors control of that information for manipulation and probing.

Manipulation
This word has gotten a bad name in recent use implying underhanded effort to get someone to do something disadvantageous, but the word’s older and broader meaning denotes an everyday event either for good or for ill. The word comes from the use of hand (Latin “manus”) tools, whether a screwdriver or a sword. For example, an invitation to lunch is manipulation, an attempt to change another person’s behavior, and I hope both parties sharing a meal enjoy their conversation. If, though, a lunch is used to pitch a pyramid scheme, the manipulation can have favorable consequences for one individual and negative outcome for the other. Similarly in the wild, one animal’s manipulation of information can have beneficial or detrimental results for another animal, depending on the degree of cooperation and competition between signaler and recipient. Both members of a mated pair can benefit from manipulating each other into reproductive cooperation, as happens, for example, when a yellow warbler male sings as he brings food to a nest. If, though, one member of that pair has advertised itself as a better parent than it really is, the benefit might be unequal.

Probing
Information about one’s biological environment — the presence or absence of food, predators, competitors and cooperators — is valuable. One way to get that information is to probe with a controlled leak of information. Communicating individuals attend for a return signal. A singing yellow warbler, for example, reveals his position and identity while listening for neighbors to reply with songs from their repertoires. A mammal returns to sniff a spot it marked with urine to see if another individual has marked the same spot.

Organisms survive by controlling their internal and external environments. Internal control is accomplished largely by physiological feedback loops in which a condition of the body is sensed, the appropriateness of that condition relative to a “set point” or range is judged (often by the nervous system or an endocrine gland), and instructions are sent to various parts of the body to modify that condition. A familiar example in the human body is a too-cold body temperature resulting in nerves sending messages instructing muscles to shiver and generate heat.

Control of the external environment is accomplished similarly by manipulating potential prey, predators, competitors and cooperators. A wolf that feels hungry benefits by learning if its environs include other wolves that can be recruited to hunt. A howl or scent mark might function both to probe for and to manipulate other wolves. For cooperating wolves their mutual manipulation in the hunt of large prey can be beneficial. Vocalizing yellow warblers manipulate the actions of mates (e.g., coordinating feeding at a nest), potential mates (e.g., attracting a mate), and territorial neighbors (e.g., threatening attack in the event of an intrusion).

Humans use communication to regulate our environments. If I say, “Please pass the salt,” or, “A glass of water, please,” I manipulate another person to regulate my blood saltiness. A back-and-forth dance to adjust physical interpersonal distance in a conversation (one person thinks that four inches is appropriate, and the other feels more comfortable at four feet) communicates with footwork as we probe each other’s willingness to compromise and manipulate each other into a compromise stance.

Many decades ago, in a fourth grade Hanukkah play, I acted the part of a Maccabee sentry with one line, “Halt! Who are you?” This short line illustrates all three aspects of communication: Speaking leaks presence and location. “Halt,” is an attempt at manipulation, and a threatening tone may strengthen the manipulative effect. “Who are you?” probes for information. The play’s author and my teacher presumably intended that I learn about a holiday’s history and develop an appreciation for drama. Their educational manipulation worked to some extent, while the line I remember from my theatrical career has served me well in thinking about the yellow warblers I studied and the evolution of communication.

David Spector (he/him) is a retired biologist and former board president of the Hitchcock Center for the Environment.

Earth Matters has been a project of the Hitchcock Center for the Environment for 13 years. After two years of the pandemic, the Center’s doors and trails are once again open at 845 West St in Amherst. To learn more, visit hitchcockcenter.org.